Where in the world is Nandaime, Nicaragua?

Nandaime, Nicaragua does not have Granada’s colonial splendor, nor does it have Masaya’s markets, or San Juan’s beaches, but what it does have is authenticity. Nothing about Nandaime has been designed with tourists in mind. It is what it is, a dusty agro-industrial town just off the Pan-American Highway. But if travel has taught us one thing in the last thirty-five years, it is that the best experiences often come from the most unexpected destinations.

Nandaime is living proof of this.

We have been to Nandaime seven times in the last twelve years and we certainly hope to return again soon. Each time, we have visited with a group of high-school students, and each time we have spent the majority of our trip living with host families. These experiences have allowed us to relive the novelty of Nandaime, over and over again, vicariously through the eyes of our students, at the same time that we have also formed lasting relationships and deep bonds with the people who live there.

Nandaime has only reinforced our long-held belief that the most meaningful travel is not about ticking off bucket list boxes, or snapping selfies in front of famous attractions, but “in having new eyes.”

This is the fifth article in a short series we are publishing on Nicaragua this Spring in the hope that peace soon returns to the country.

Oxen cart at the edge of Barrio Modesto Marin

Nandaime’s principal Catholic Church was destroyed in an earthquake in 1822 but work on the Iglesia Santa Ana did not begin until 1859, during William Walker’s insurrection. Dedicated to the city’s patron saint, its walls are built from stone carried in by oxen and mules from the base of nearby Mombacho volcano. The mortar which holds the building together is a peculiar concoction of lime, milk, and crushed eggshells.

Legend has it that each family in Nandaime was asked to create eight bricks which were then used to build the church’s arches. The altar was hand-carved from wood by a local family named Sandovar, who were the descendants of slaves. It is composed of two Solomonic columns which are decorated in grape leaves and fruit, as a nod to the eucharist wine. The entire structure is painted gold.

Santa Ana is unique in that it has a second, smaller altar, as well, carved in the same manner.

The church was completed in 1872, and became a National Historic Monument in 1972, the year of Managua’s great earthquake. The first time we saw the church, it had fallen into disrepair, but it has been repainted and renovated over the last few years.

Arrangements can be made to climb the bell tower; however, be forewarned that the stairs are steep and precarious.

Gazebo in the Parque Central

El Parque Central, or El Parque Santa Ana, sits on the doorstep of the city’s main Catholic church. It has recently undergone a costly and controversial renovation that saw it completely sealed off for more than a year. However, it has been restored to its colourful origins now. At the centre of the park is a pretty rotunda or gazebo. There are benches and shade trees throughout, as well as a small kiosk selling food. All around the park on most days, you can find vendors hawking fresh produce or fried plantains with vinegar and cabbage for only 4 cordobas (about 15 cents). They are a personal favourite of ours.

The park is often full, especially since the municipality began to offer free Wi-Fi here. If you need to change money, you can also do it in the park. You will find the informal money-changers across from the town hall. They are safe and fair.

Vendors just across from the Parque Central

The original town hall was built in the Greco-Roman style and designed by a French architect. However, much of it was destroyed by fire in 1926 during the Constitutional War (1926-27). At the time, American soldiers were living there. The current building was remodeled in 1941.

It sits directly across the Parque Central from the Iglesia Santa Ana.

Ranchero in front of El Calvario

El Calvario is a smaller church, also constructed in the Baroque style. It predates Santa Ana and was inaugurated in 1848. It was initially built to replace the loss of the original Catholic church and is still the centre of the town’s Holy Week celebrations. It contains one of the municipality’s most venerated images, as well, that of Jesus Nazarene. During Semana Santa, it is paraded through the city streets.

North of the colonial centre of Nandaime at the bus terminal between Avenido 1 NE and Avenido 2 NE you will find the Municipal Market. It was moved here from its former residence in the downtown area in order to improve traffic circulation. This is where Nandaimenos do their shopping and is a wonderful cultural experience. Fresh produce is ridiculously inexpensive here, and although much of the market is dedicated to the mundane items of everyday life, such as hardware, pharmaceutical products, knock-off clothing, beans and rice, you can also find locally made well-priced leather goods like belts, baseball gloves and sandals.

The market is open air and easily navigable, unlike the markets of Granada and Masaya which can feel claustrophobic. English is a rarity in Nandaime, but smiles and hand gestures will go a long way if you don’t speak Spanish.

Bus Terminal in the Municipal Market

As an added bonus, there are beautiful views of Mombacho Volcano from the hill behind the market.

It would be fair to deem everything about Nandaime as off-the-beaten-track as a traditional tourist destination; however, outside the mild splendor of its colonial heart there are some real gems for the intrepid traveler.

Several barrios (neighbourhoods) surround the colonial downtown of Nandaime. And although we have visited them all, we are most familiar with the barrios of Modesto Marin and Francisco Estrada. Some of the homes in these barrios were built by the Quebec-based NGO Groupe Entraide-Spirale in conjunction with the local Centro Communitario Oscar Arnulfo Romero following the devastation of hurricane Joan in 1988. Others have arisen since.

Through the Romero Centre or Spirale, you can arrange to live here with local families. The accommodations are not five star, but the hospitality is. The barrios are constantly alive with the thrum of everyday life: uniformed children traipsing to school, buses stopping by to pick up day labourers for the sugar can fields, impromptu soccer games on concrete courts, fish mongers hawking the morning’s catch. Or just neighbours calling yard to yard. The scent of woodsmoke ovens is ever present, the press of humanity always in the rutted streets.

If you want to know what life is like in Nicaragua, visit the barrios. Join a soccer game. Talk to la gente. It may feel like culture shock on the first day, but it will feel like home on your last.

The mention of bull-fighting can raise a lot of hackles, but rest assured that the Nicaraguan equivalent is not a blood-sport. During its Patron Saint Festival on June 26th, Nandaime holds the Tope de Toros which parades a series of bulls 30km from the hills of Mombacho to the Municipal Bull Ring in Nandaime. The parade is accompanied by rancheros on horseback and much music and dancing.

What happens in the bull ring is more like rodeo bull-riding than Spanish bull-fighting.

Anyone who knows anything about Nicaragua is aware that the “beautiful game” here is not soccer, but baseball. Last year, Nandaime hosted the Major A Championships in their modest stadium on the north east side of town. The players in the country’s chief league are hardly millionaires, and you won’t recognize their names, but it would still be unique cultural experience to root for the home team. And the ticket price isn’t likely to turn you off.

Several famous baseball players have come up through the Nicaraguan ranks to make it in the MLB, including Denis Martinez, Vincent Padilla, and the Nandaime-native Everth Cabrera. For a truly unique gift, ask around for the team tailor and have him make you a ball cap. Mine cost $2.

For almost 100 years, Nandaime was the site of world class chocolate production. By 1867, Emile Menier, the famous French chocolatier, had acquired approximately 15000 acres of land between Nandaime and Rivas, stretching all the way to Lake Nicaragua. Three hundred Mozo were trained and employed to water and tend the 1800 cocao trees, and an overseer was established in a large hacienda just 8 kilometres south of Nandaime on the road to El Jabillo, backing onto the Ochomongo River. The large white home also had a formal garden, fountain, chapel, and a series of houses for the peasants who worked the fields. Irrigation was brought by a canal fed by the lake, and the cocao produced there was transported to France via a port in Grey Town. 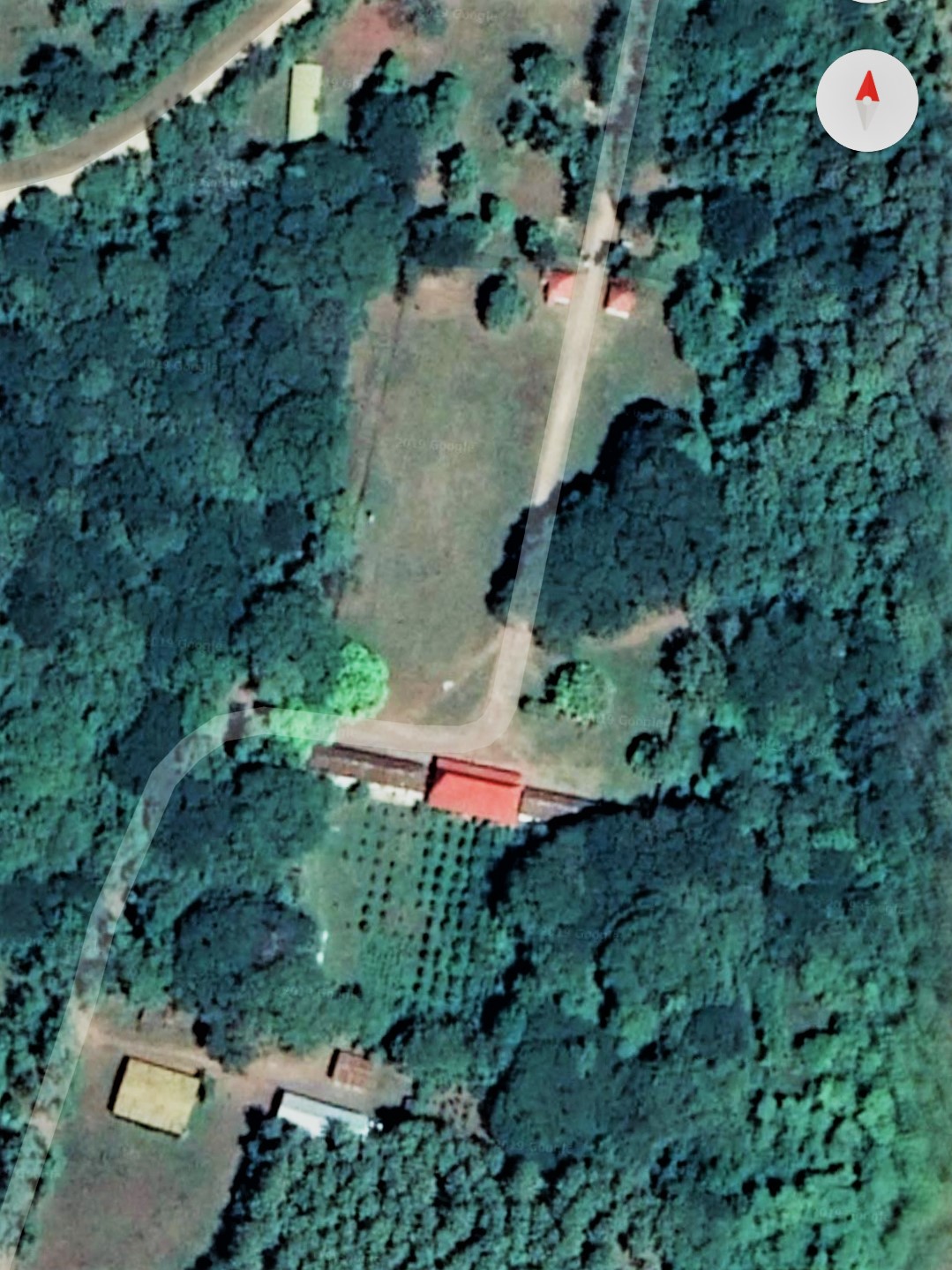 Chocolate production in the area was halted after the sale of Menier’s company to Nestle back in 1959; however, the hacienda still exists today. Its large white gatehouses and imperious entranceway lined with palms is clearly visible from the road, as is the hacienda (although somewhat weary).

If you have more time…

Situated halfway between Granada and Nandaime is COLCIBOLCA (La Reserva Natural Volcan Mombacho). It’s one of our favourite sites in Nicaragua. Here you can hike the crater perimeter, zip-line through the trees, do a canopy tour, or visit the oasis of Café Las Flores coffee plantation and El Progreso Hacienda. It’s good as a day trip or even as a vacation destination all on its own.

Have you ever been to Nandaime? Or do you have any other favourite destinations off-the-beaten-track? Let us know in the comments below!